Maps and Stamps and Wishing Stars

As a child I was taught (by my father) how to read maps. On trips out of town I used to sit in the front passenger seat of the car and give my father directions. Presumably this was as much about keeping my sister and I apart so that we wouldn’t fight in the car as it was about teaching me navigation.

I also collected stamps. My brother (nine years older) had a stamp collection, so I had one too. I used to buy the cheap assortments: 100 stamps for 25 cents. (I am old enough to remember 5 cent popsicles.) I was mostly interested in stamps that had pictures of birds or animals or butterflies, and not at all interested in how much the stamps might be worth.

My interests in maps and stamps come together in G is for Geography.

The book is enclosed in a box covered with actual maps (I have a collection of discarded maps) and stamps and tied shut with a ribbon. Although the work was produced in an edition of 6, no two copies are identical.

I wanted a format that reproduced the difficulties that many people have when unfolding and re-folding maps, so I created a structure with pages that rotate open randomly.

The pages are covered in archival pigment prints of scanned maps and have genuine stamps to match the letter of the alphabet of each map’s location.

I wanted to match letters of the alphabet because G is for Geography is also an alphabet book. I wrote the story for the reverse side so that the first letter of each page is in alphabetical order.

I was prompted to write about this particular book this week because of a post on boingboing. Bonhams is having a History of Science auction which includes some wonderful “pocket” globes. One can imagine an 18th century gentleman carrying one of these for handy reference while discussing world affairs with his friends at the coffee house. 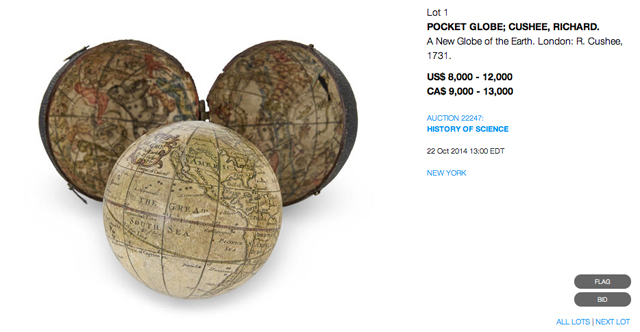 as well as a wide range of other historic science-related artifacts. The item that really caught my eye, and which I would love to own but can’t afford is this:

It is even small enough to fit in our tiny, overcrowded house!

And now for something completely different …

Things are progressing gradually. I have been collecting wishes, transcribing them, and folding them into stars. I now have about 14 litres (3 gallons Imperial measure, 3.7 gallons U.S.) but will need a lot more! I need to fill several of these bins.

If you have already left me a wish (or three) please wish again, and please pass the link along to friends and family. If you haven’t wished yet, you can leave wishes here.

I look forward to your assistance in completing the project.   ; ]

6 Responses to Maps and Stamps and Wishing Stars