When I first encountered Pinterest, I thought it was largely a waste of time. Why would I need to join a website to find and/or store references from the web?!

Shortly after starting my blog, I noticed on my stats page that a lot of hits were coming from Pinterest. I figured “If you can’t beat ’em, join ’em” and signed up for a Pinterest account. I started a few boards of my own and began pinning images, including ones from my blog and website.

This is my most popular pin so far: directly and indirectly (re-pinned on other boards) it has brought almost 700 views to my website and blog in a year. 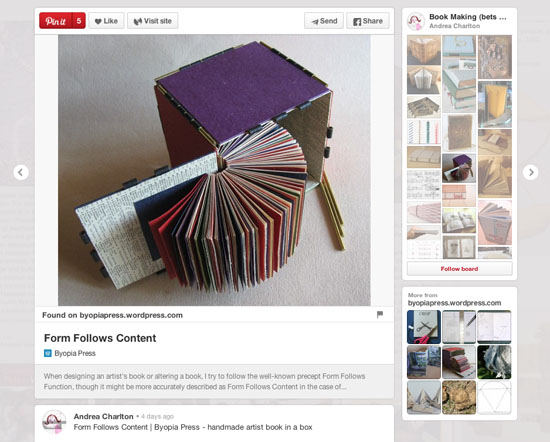 Much of the time people follow the link from a pin and just look at the one post or page the image came from, but sometimes people stay and look at much more. Although I have not set up my site as a commercial venue, I have sold things as a result of people finding my work. I don’t know if they got to the site through Pinterest, but there is a good chance they did as it is my largest single source of referrals.

I also use Pinterest as a way of finding things. It’s a pre-edited image search. I follow a few boards from people that have similar interests. (You can follow individual boards, or you can follow people. I mostly do the former.) When they post something new, I get to see it. I also get suggested pins based on the boards I have myself. As a result of both those sources of images I have found a number of wonderful things. For example:

an old lettering book with images available free on line,

a review of a Su Blackwell exhibition, 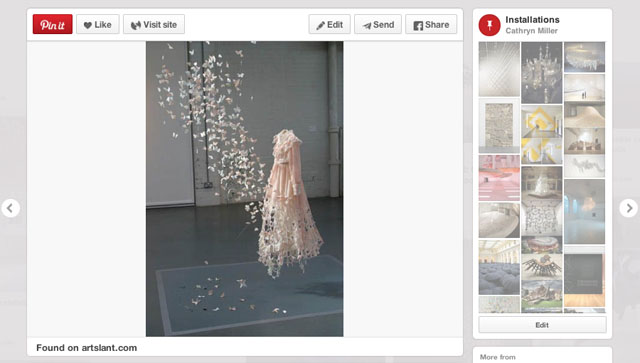 (this one took a couple of steps) Noriko Ambe’s website,

and most recently, a lovely article with selections on letterpress printing taken from Anais Nin’s diary.

I still search for things myself, but there is a delightful serendipity in the finds of others, even if it’s the Pinterest algorithm.

I have one particular pinner who is my current favourite. “Mr Loo” is interested in books and keeps boards with very specific topics. This means that I can use his boards as a reference without having to wade through hundreds of images.

Here’s a closer look at some of his boards 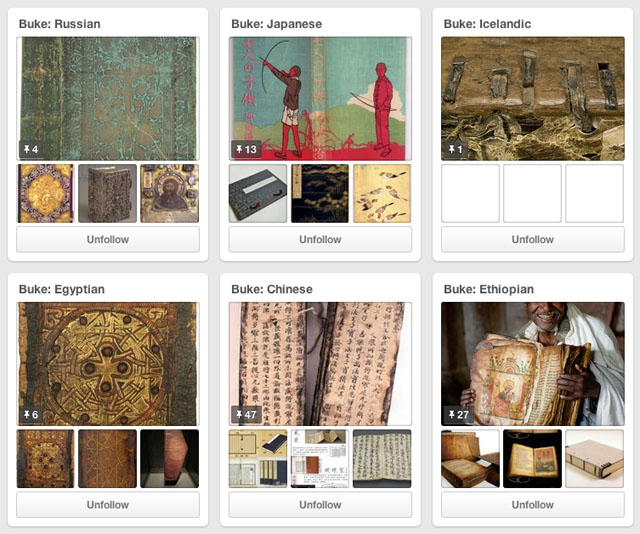 and here are some of the other people I follow. (You may be able to make out that some of the ‘people’ are actually museums and galleries.)

Since I am a visually-oriented person, I find the boards useful as a filing system. I don’t pin every image from a website I might want to re-visit, just one that will remind me what is there if and when I need it. I keep pins on people and subjects that interest me.

You can keep private boards, so I have ones for recipes and for crafts like sewing and knitting —things that are not part of my public persona as an artist. You can also use Pinterest as a resource without keeping any boards of your own.

It turns out that Pinterest is not so useless after all. What started as an attempt to draw traffic to my website and blog is now also providing me with a useful reference tool and a source of entertainment.

I have been working in the book arts field for more than twenty years, and operating Byopia Press with my husband David since the late 1990s. I began producing artist's books and altered books in 2004.
View all posts by Byopia Press →
This entry was posted in book arts, Design and tagged book arts, design. Bookmark the permalink.