I sent off some things in the mail this week. The big job was preparing an order for the Minnesota Center for Book Arts. Some of you may remember this jar.

I wrote about Thank Your Lucky Stars on May 8, 2016. This week I filled and labelled the last of the 100 plastic pill vials I had purchased for the project.

When I filled the last bottles, I was left with 5 stars so I just randomly distributed them among the bottles so some purchasers will get a bonus lucky star. After packing the box for MCBA I am left with 4 copies of the work. I think I will number and sign copy #100 —the others are neither numbered nor signed— and perhaps think of something special to do with it.

Also sent off in the same parcel were some copies of IF. (You can find a version to print and make in this post.)

I took some pictures when I was making the bands to demonstrate the process.

I printed out an image of window screen, cut strips, then scored and folded one end so that the distance between the fold and the tip of the strip was half the width of the book. Then I wrapped each strip around the book and a scrap piece of card, applying glue as indicated by the pointy fingers.

I include the scrap of card for two reasons: it ensures that I don’t make the band too tight, and it protects the surface of the book from the adhesive. I glue both tips —under surface of the short left-hand end and upper surface of the longer right-hand end— as this means both ends are secured so that there is nothing to catch when the band is removed and replaced. It also means I don’t have to measure to avoid having the glue area extend beyond the overlap. 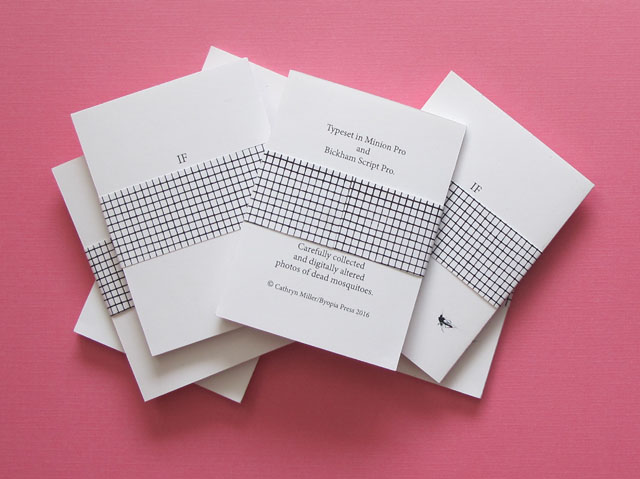 I also mailed off my 16 copies of the Hedi Kyle panel book instructions, including a DIY model. (It’s the same one I posted here. )

One other thing we did this week was take down our Christmas tree on Twelfth Night. (We put it up on Christmas Eve.) Here’s a picture taken just before we began the disassembly. A number of the decorations shown in the picture were gifts from friends. The gopher with star was given to us this year. (Somebody has been paying attention to the blog!) 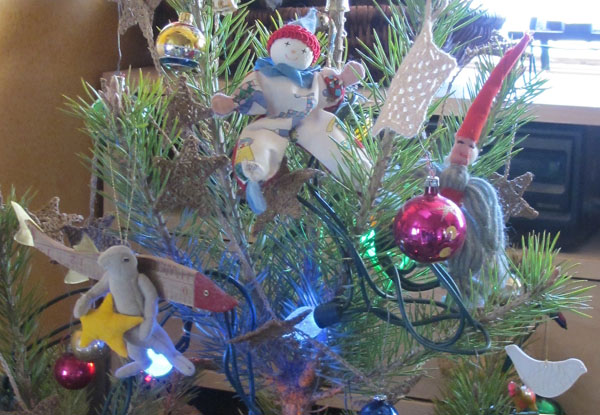 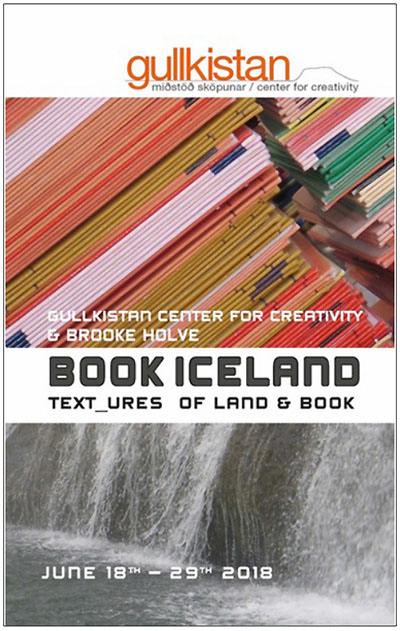 There are still a couple of spaces left for participants in Book Iceland. You can find more information here.

The Book Club of California is planning a Print-Your-Own Broadside Party.

Another shawl completed, but not yet washed and blocked.

The colours in the yarn create a pattern of their own so I kept the lace to a minimum.