This week I added the upper compartments to the self-closing bottom boxes I showed you last week. The first step was to glue down the interior triangular flap containing the pocket.

I glued the triangles in both models to the bottom of the box. This was not the best idea —you will see why later— so I would recommend gluing the two surfaces (indicated by the green pointy fingers) to the undersides of the two square flaps.The light green base is scaled so that it will work as a wallet. (I know almost nobody functions with just cash anymore, but it seemed like a good idea at the time.) The bottom box is large enough to hold paper —nowadays often actually plastic— money, and I added two twist boxes: one for coins and one for things like bus tickets.

Since I was using copier paper, I had to make the upper section of the twist box from two pieces, rather than a single strip. (You can find a template for twist boxes here and instructions for assembly here.) The height of your wallet determines the size of the box, so my twist boxes are based on a 3″ (7.63 cm) square.

I made my twist boxes so that one twists clockwise, the other counterclockwise. This makes the boxes look symmetrical, but I discovered that I have more difficulty opening one of them. You might want to experiment with which way is easier for you to open. 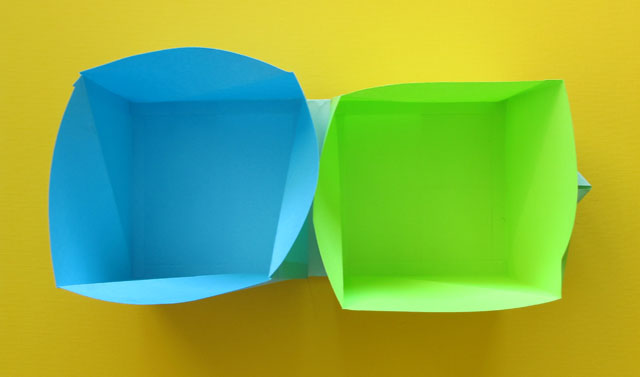 The boxes are attached to the base by gluing one half of the bottom square to the two square flaps of the self-closing outer box.

Close the wallet by inserting the pointed flap into the pocket. You can see the evidence of gluing the triangular pocket to the bottom of the outer box, which is why I now think gluing to the upper square flaps would be better. 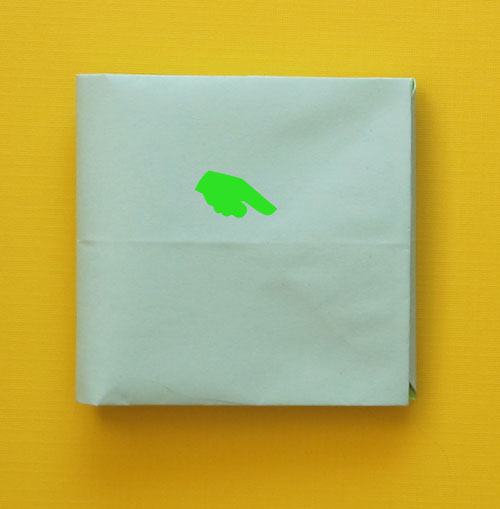 The second base I showed last week is actually a prototype for a travelling knitting case, so I chose to add pockets for the things I would need to take on holiday. 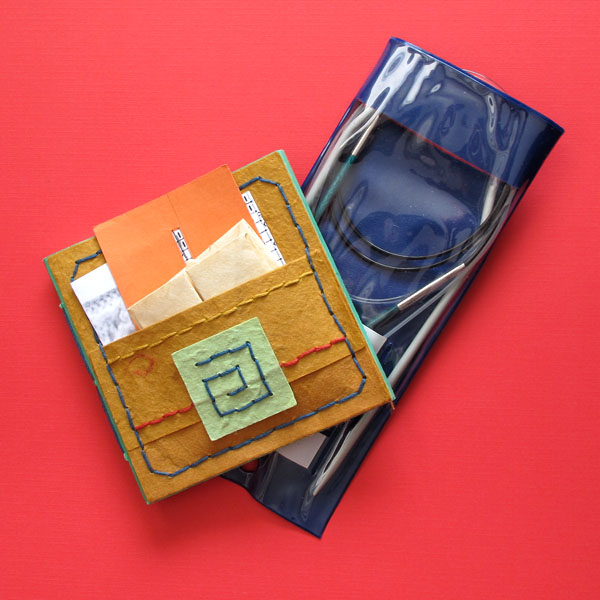 I need to have knitting needles, two colours of stitch markers, a tiny pair of scissors, and a pattern. The pattern can go in the large bottom section. I added a rectangular box to the square end to hold the knitting needles.

As you can see, the green box is the height of the blue base and the width of the square flaps. You can find instructions for this box here. 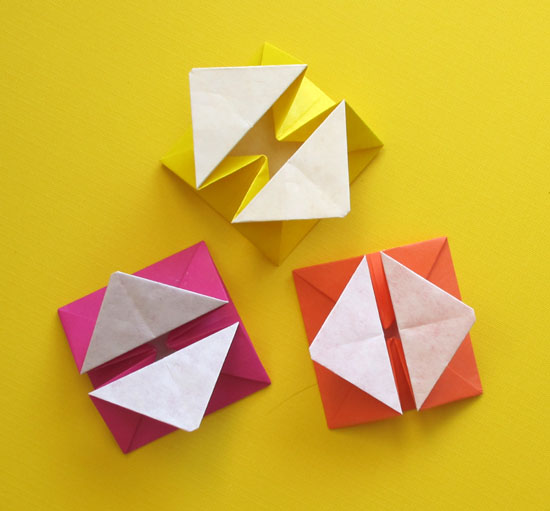 I decided to make origami tatos for the top layer rather than twist boxes. The ones above were made from Paper Kawaii’s instructions which you can find here.

When I made my first version of a Zhen Xian Bao, I made the top layer boxes first, then scaled the lower layers to match. That is definitely easier than working from the bottom box up. Figuring out the dimensions of paper needed for the tatos was tricky, as they are folded diagonally. I did some complicated math —the Pythagorean Theorem came into play—  and double checked my calculations by using a graphics program to make a square the size I had worked out, rotating it to measure the diagonal.

I cut a sample square of origami paper and folded one tato. It was fractionally too big, probably because of my folding technique, so I cut another square a tiny bit smaller and made a second tato. That one worked, so I cut and folded two more using the smaller measurement. I discovered that my finished tatos were not perfectly square, but fortunately they fit the model the way I wanted. 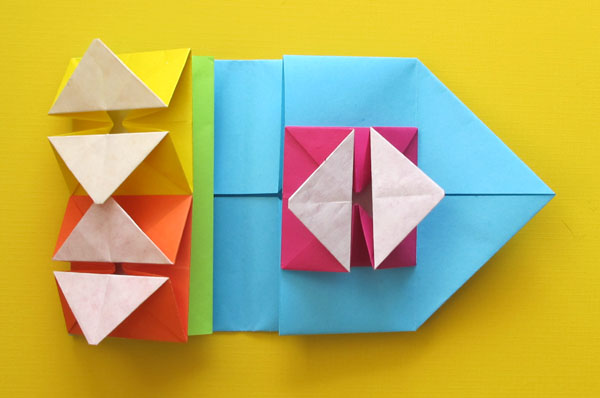 If you don’t want to put yourself through mathematical calculations and making test samples, you can use twist boxes. You can also add more layers of pockets if you want.

The two left hand boxes were attached by gluing the left half of their bottoms to the left flap of the green box beneath them. The right hand one was glued half to the upper square flap and half to the lower. 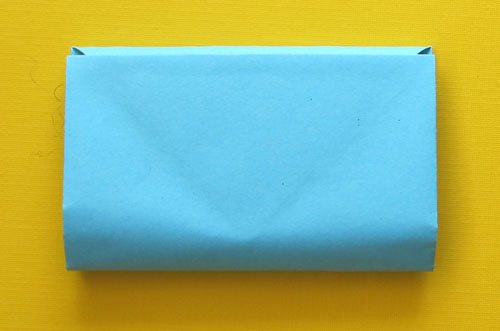 There’s that triangle shape again from gluing the pocket to the bottom of the box.

Here’s an end on view of the model. There is a lot of space in the outer fold at the left, but that will get taken up when all the pockets are filled.

I will show the actual knitting ‘book’ next week.

In other book news: 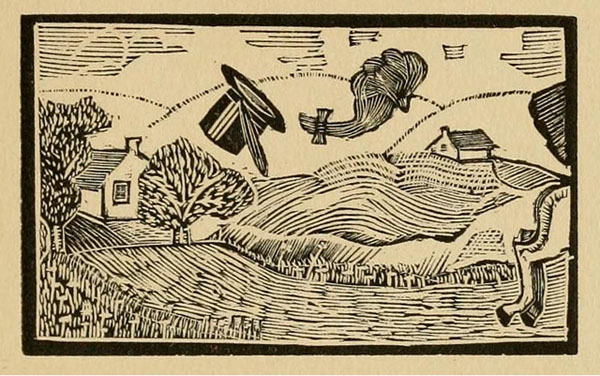 There’s a short article in The Public Domain Review on The Diverting History of John Gilpin: Shewing how he Went Further than he Intended, and Came Safe Home Again (1782). The article includes an on-line copy of a 1906 edition featuring woodcuts by Robert Seaver, done in the style of some of the eighteenth century editions. If you would like to own a hard copy, there is an inexpensive used one on ebay as I write this. (No promises that it will still be there when you read this.)

I don’t usually include a video in my Sunday posts, but I am making an exception this week. I received this link from several sources, but you may not have seen it yet. It’s a lovely story about garbage men in Turkey building a library from discarded books and magazines.

I spent some time this week knitting test swatches. I even washed and blocked them. 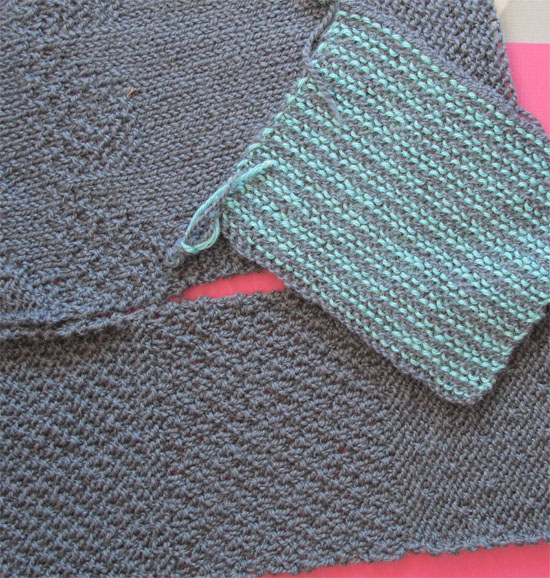 There must be something peculiar about the way I knit: if I get the right number of stitches per inch to match a pattern, I get the wrong number of rows, or the other way around. I am planning two sweaters and it looks like math will be involved here too! The first is a pattern from Garn in garter stitch. (That’s the two-colour swatch above.) 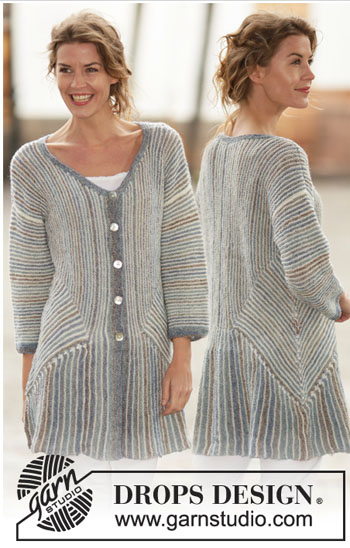 There would be some calculations involved even if my stitch gauge did match, as I plan to tighten up the neckline and add a roll collar/front instead of the button placket. If you want to check out the pattern, you can find it here. (If you prefer your knitting instructions in a language other than English, Garn offers lots of options. Just pick the language you want in the box below the picture.)

The second sweater will be an attempt to recreate something of the look and feel of my current favourite sweater. It comes from La Llama and the one I own is black.

I have found several patterns on line, but this one (in German) turned up on Pinterest yesterday and is close enough to what I want to serve as a basis for my pattern. (This is assuming that between my vestigial German and Google Translate, I can make some kind of sense of the instructions.)

It even has the kind of texture I want and where I want it! (See swatches above.)

I have also been working on a shawl, carefully recording exactly what I am doing. If all goes well, I will be giving away a free knitting pattern next week. We shall see how I do with drafting the lace pattern part!

I have been working in the book arts field for more than twenty years, and operating Byopia Press with my husband David since the late 1990s. I began producing artist's books and altered books in 2004.
View all posts by Byopia Press →
This entry was posted in book arts, bookbinding, DIY, free printable, instructions, knitting and tagged book arts, bookbinding, Chinese Thread Book, free printable, instructions, knitting, Zhen Xian Bao. Bookmark the permalink.