Writing instructions on the outside of mash notes seemed to be a big hit with my female classmates in Grade Nine, so I came up with two more versions. 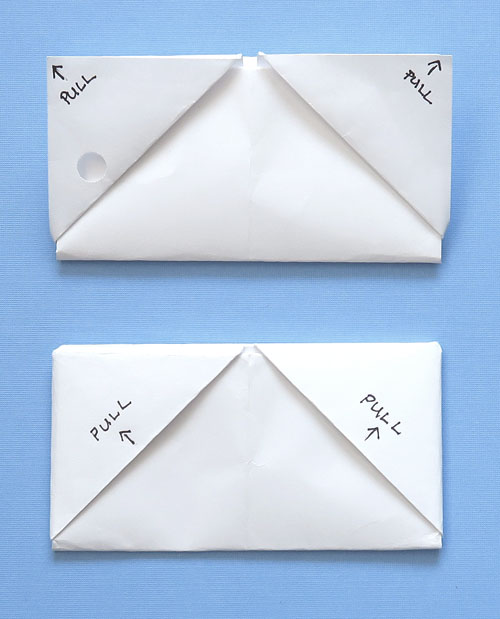 They are almost identical, with the corners on the surface of one, and tucked under on the other.

Place your paper with the long measurement vertical. Fold the sides in to the middle, open flat, and turn over. Fold the top corners down and in to the middle, fold the point down so that the fold line meets the crease of the side folds (the tip will meet the former outer corners at the middle), then unfold it.

Unfold everything, then fold the whole top edge down along the horizontal crease you made when you folded the point down. 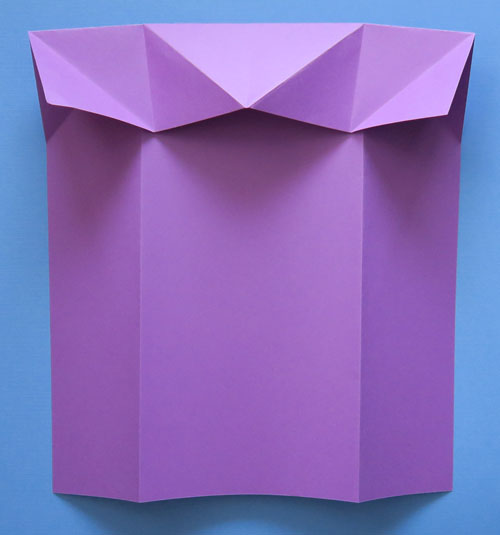 Open the paper flat, turn over, and reverse the top fold. 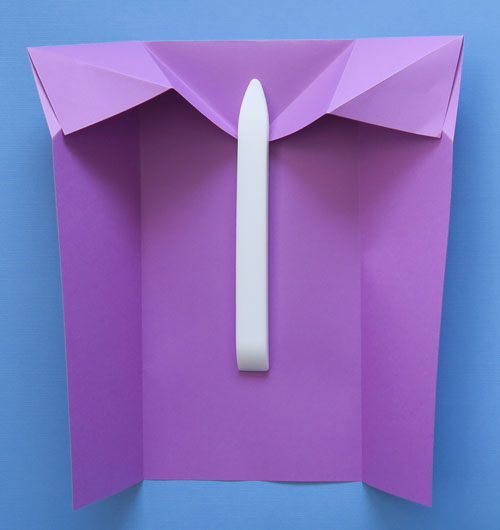 Fold the sides in and under the corners. You should have something that looks like this, with two squares on top. The former outer corners are under the tip of the bone folder in the image below.

Fold the corners out as shown below.

Tuck the bottom edge into the pockets under the turned back corners.

Write “Pull” appropriately. (See image of the upper mash note at the top of this post.)

Follow the instructions given above until you reach the step where you fold the corners out. Instead of doing that, fold them under. Proceed with the rest of the steps. Your finished mash note should look like the following picture.

Again, write “Pull” where indicated in the image (lower mash note) at the start of the post.

Tomorrow I’ll show you how to make a Japanese letter fold.

The Herdwick sweater is complete. I would have posted pictures yesterday, but the sweater wasn’t quite dry! I am not completely satisfied with the blocking, but that can be fixed later.  ; ]

It feels a bit like wearing my Mom’s old beaver fur coat: partly the weight, and partly the shape/drape of the garment. Here’s a close-up.

I have been working in the book arts field for more than twenty years, and operating Byopia Press with my husband David since the late 1990s. I began producing artist's books and altered books in 2004.
View all posts by Byopia Press →
This entry was posted in book arts, instructions, paper folding and tagged book arts, instructions, mash note fold, paper folding. Bookmark the permalink.