I actually finished some things this week.

My entry for the #areyoubookenough_mountain challenge —Volcano— was completed a day late on September 1, but it was completed.

It is now hanging from a high shelf in my studio.

The book consists of seven cones, reducing in size sequentially. When fully open it measures about 36 cm/14 in.

The yellow text of the book reads:

Things grew quieter from May 15 to May 17, then on the morning of May 18 the mountain blew its top.

On the morning of May 20, 1980 we awoke to find that the world had turned completely grey.
Everything was covered in a layer of ash. The smoke and ash continued intermittently for three more days.
The sunsets were amazing.

I also finished … and still counting …

Well, it still has to be mounted in a black shadow-box frame. I attached small book board ‘posts’, then attached those to a square of foam core so the piece will float in the frame. 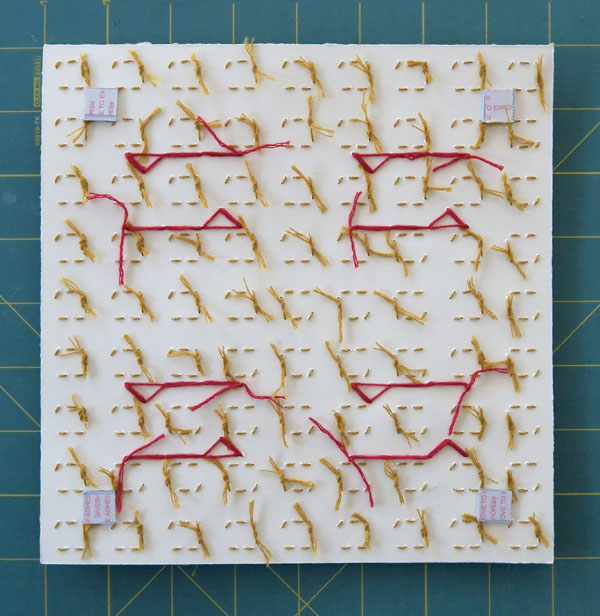 I did some piercing of the panels for Nurture, not Nature. The image below shows the guide I made and the awl I used.

The piece will be sewn together with off-white crochet cotton. I bought an almost full box of this from a yard sale about five years ago and it has turned out to be very useful, though none of it has been anywhere near a crochet hook.

I am not yet satisfied with my assembly method so this will be taken apart (again) so that I can try out a third system of sewing.

I will try to have it completed by next Sunday.

No, really I will.

And summer is apparently officially over. From the Environment Canada website:

Wind gusts: 50 to 80 kilometres per hour on Sunday from the northwest, the strongest gusts in southeastern Saskatchewan.

Frost: Widespread frost is possible in a number of localities in southern Saskatchewan on Tuesday morning.

Remarks: After a day of well above normal temperatures Saturday, an Alberta Clipper will pass cross the Prairies on Sunday. The system will bring showers, gusty winds and cooler temperatures. A cold air mass will slide south in the wake of the Clipper over Saskatchewan for Monday and Tuesday morning. Cool winds from the north will dominate Monday, but ease Monday evening, allowing the cold air to settle in for Tuesday morning. Frost advisories are expected to be issued with the Monday afternoon forecasts.

The newest edition of The Book Arts Newsletter is now available for download. You can find the link on this page.

Timothy C. Ely has added a gallery page to his website.

You can find images to drool over here.

The Getty Museum has a new Research Collection Viewer.

A post (featuring some of Ed Ruscha’s 2,600 images of L.A.) with information and a link to the new viewer can be found here.

This month’s Friday Night Flicks series will focus on illustrators. The first video, an interview with Yuko Shimizu, was posted on Friday.

To wrap up your week-end, here’s an article (with a story) on the medieval Chinese precursor to Cinderella.