Fox and Geese was a favourite outdoor winter game when I was in primary school. After a fresh snowfall, some of us would try to get to school early so that we could tramp out the course to be ready for play at recess.

It would not take much extra effort to turn the snowshoe/horse/deer/coyote trails in our pasture into a giant game of Fox and Geese.

Fox and Geese was a tag game Colonial children (Author’s note: I am not that old!) liked to play during winter because they could make the wheel shape they needed easily in the snow. (Not to be confused with the board game of the same name.) The rules come from Colonial American Holidays and Entertainment by Karen Helene Lizon, pp. 99-100. 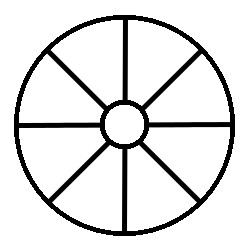 The wheel should be about 50 feet across with eight spokes and a smaller circle in the middle. You could make it smaller if you need to, but it will cut down on the area you have to run in.

Playing: One person is chosen to be “It” (maybe with a counting-out rhyme). “It” in this version of tag is also called the Fox. All of the other players are Geese. The circle in the middle of the wheel is the base for the geese. Starting at the base, the Geese have to run on the lines of the spokes and rim of the wheel while the Fox chases them. If the Fox tags any of the Geese, they also become Foxes and chase down the remaining Geese to tag them.

In the version I used to play, the goose tagged by the fox became the fox, while the fox became a goose. I recall that the game involved a lot of laughter, and shouting, and excessive squealing (I thought) on the part of some female participants when one of the ‘cute’ boys was the fox.

Fox and Geese is also a board game, originating in Northern Europe during the Viking era. Early boards had forty-five playing positions; I have chosen a more recent version. 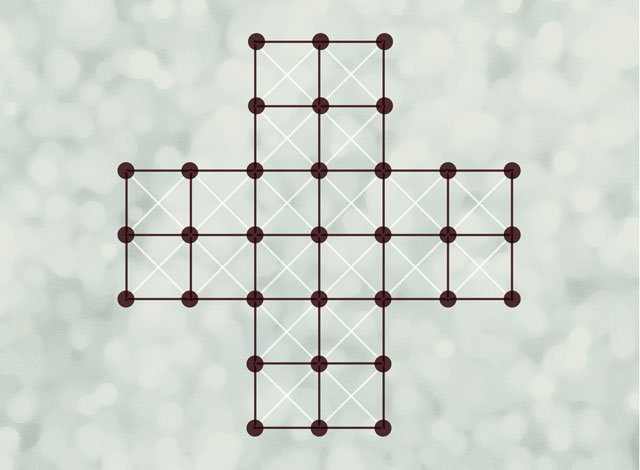 Trim off the white edge of the printed game board

You can use playing pieces from the pdf “Chinese” Checkers, or buttons, or coins —any group of small objects— so long as one piece is identifiable as the Fox.

A slight variation of the game is played on What We Do All Day? The fox plays first and there are more geese, which improves their odds.

Some of you may have recognized the Fox and Geese board layout as the same one used for Solitaire. (Also known as Peg-Solitaire, a plastic version was sold in North America in the late 1950s or early 1960s under the name Hi-Q.) There is evidence that a version of the game was played during the reign of Louis XIV of France.

The board you printed for Fox and Goose can be used for the English version of Peg-Solitaire. The most common version of the game begins by covering all the points on the board at the start, leaving only the central hole empty. Pieces are jumped and removed until a single piece remains. The player wins if the last piece is in the central hole. Rules for play are on the second page of the Fox & Geese and Solitaire pdf. 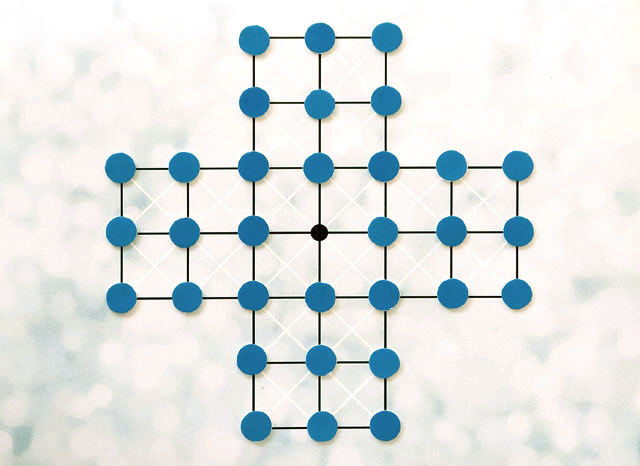 Further information about the game and its variants can be found on Wikipedia.

I have been working in the book arts field for more than twenty years, and operating Byopia Press with my husband David since the late 1990s. I began producing artist's books and altered books in 2004. I also create prints and drawings that are frequently text-inspired or text-based.
View all posts by Byopia Press →
This entry was posted in free printable, instructions and tagged free printable, game, instructions. Bookmark the permalink.