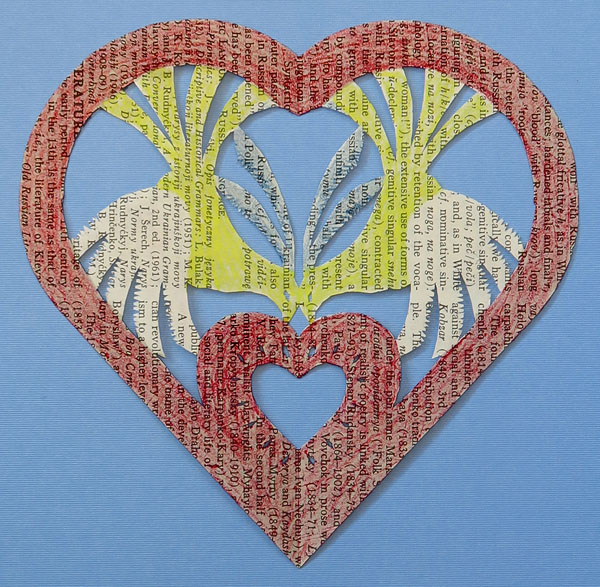 The result is that this cut paper valentine needs to be cut out using a knife or a combination of knife and scissors. I am not entirely happy with the results for another reason as well. The birds don’t ‘read’ as well as I would like. The paper I used —a page from a discarded encyclopedia— worked well, but the text is too distracting. I used coloured pencils to make the image clearer, but something opaque, like gouache, would have been better. Some historic valentines are quite heavily painted and that approach might have produced a more pleasing result.

If you would like to play with my design, click on the image below and download the jpeg. You can re-size it to your desired dimensions.

I cut out a template which I then traced onto one half of a folded sheet of paper. As well as cutting out the main shape, I added some cut details —eyes for the birds, a pattern on the smaller heart— before colouring.

Better yet, you can just cut out a heart and cut a pattern you design yourself.

Traditional scissor cuts are much freer about bits being separate. There is no requirement for the finished papercut to hold together as a sheet since the intention is to mount the final image to a backing. Here’s a Polish example.

Here’s a papel amate figure from Mexico. (Learn more about these here.) 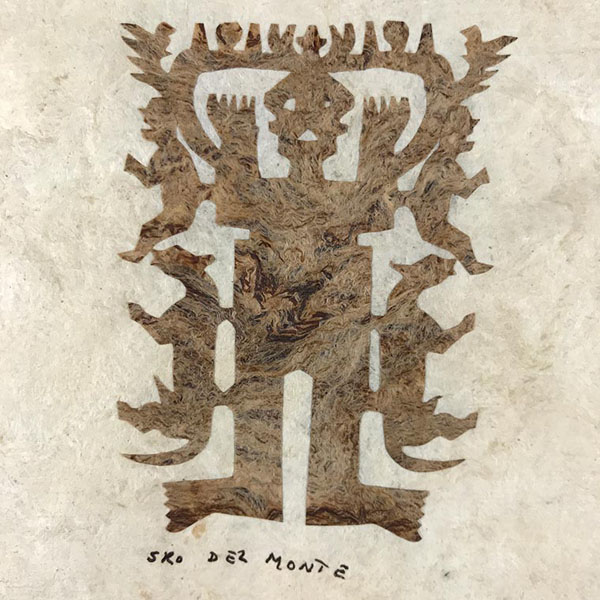 Traditional scissor cuts were often folded multiple times. As an example, this valentine token by Christian Strenge was folded in eight two different ways to achieve the double pattern of hearts and the alternating urns and flowers. 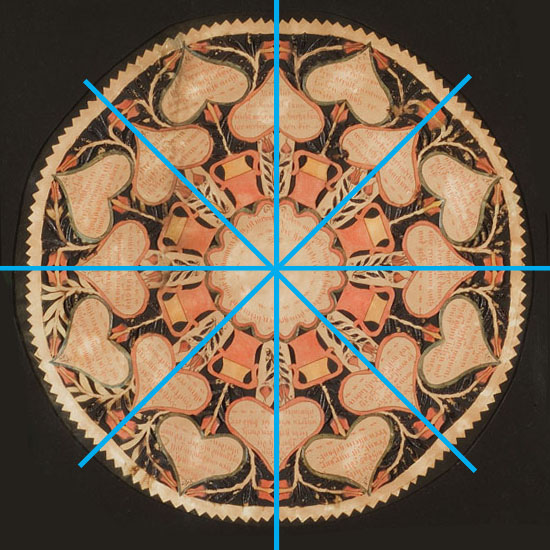 If you want to make a round valentine papercut, and are nervous about starting from scratch, there are a few simple designs available. This one is from The Kirigami Project.

I thought this one from Danish Things might be particularly suitable for the Lunar Year of the Rabbit! You can download the design file here.

Of course, if you are one of those who own a cutter that uses svg files, you can download one of the many available on the internet, but that removes the fun of cutting it yourself!

If you don’t wish to do any paper cutting but would like to make something, you can look through Byopia Press valentines from previous years on this page.

The Winnipeg Art Gallery is hosting an exhibition called Headlines. Much of the work is text-based in one way or another, so I thought it appropriate to mention it here. You can read about it in this article.

If you are interested in learning more about some of the less-well-known aspects of typographic history, you might enjoy this recent piece by Steven Heller: Hispanic Women and Their Typographic Legacy.

Interested in an example of accurate registration in a letterpress print that went through the press six times? Read about it and watch a video here.

I have been working in the book arts field for more than thirty years, and operating Byopia Press with my husband David since the late 1990s. I began producing artist's books and altered books in 2004. I also create prints and drawings that are frequently text-inspired or text-based.
View all posts by Byopia Press →
This entry was posted in art, book arts, DIY, free printable, instructions, paper cutting, paper folding, typography and tagged art, book arts, free printable, instructions, paper cutting, paper folding, typography, Valentine. Bookmark the permalink.