I don’t often take on commissions. I have done a few custom sketchbooks, wedding albums, and guest books over the years, but the work is often boring (for me) and the remuneration rarely sufficient to pay for the time spent in finding out what the customer really wants. 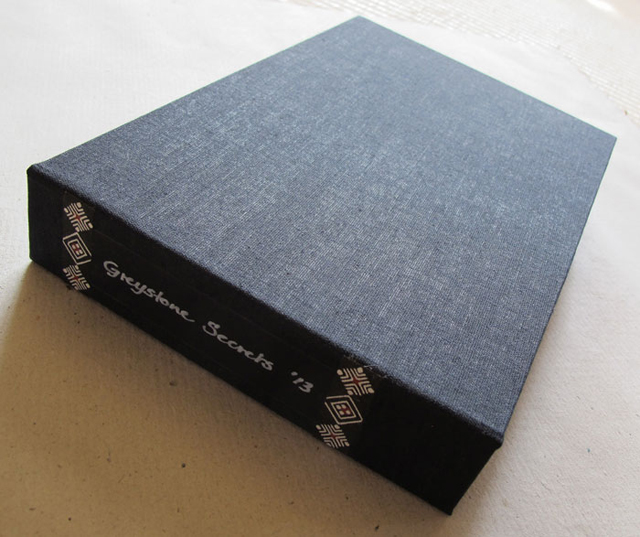 I was asked to produce a photograph album commemorating a special event at the University of Saskatchewan. Here is some explanatory text from organizer Joe Wickenhauser:

Greystone Secrets: A Queerstorical Campus Walking Tour
Greystone Secrets was an interactive historical walking tour that sought to commemorate the struggles and victories of a largely unknown history of sexual and gender diversity at the University of Saskatchewan. Through storytelling, historical exhibits and a tour of the Saskatchewan Archives Board, the event aimed to provide a venue for intergenerational community building and to encourage local research on gender and sexual diversity. The event was free of charge, wheelchair accessible and open to the public with nearly 100 participants attending from October 4 – 6, 2013. As part of the tour, Greystone Secrets also provided costumes, professional photography and gum to tour participants to recreate the photo, “Nan & Hope & the 99 Year Old Kiss.”

What was required was not just a simple album with photographs of all the participants, but something that captured a sense of Nan McKay (1892 – 1986), whose photograph kissing a friend had inspired the photographic part of the event. I was given the opportunity to look through Nan’s old photo album. It quickly became evident that she had a well-developed sense of fun, and would have been posting ‘selfies’ on Facebook if she were alive today.

I decided that a ‘moveable book’ would be appropriate, and made sample mechanisms to show to the people involved as well as staff at the Murray Library Archives, University of Saskatchewan, who would ultimately be paying for the work.

The album is made in the same proportions as Nan’s album, but is mounted permanently in a clamshell box. This permitted the inclusion of assorted pockets/envelopes without causing too much distortion to the actual album pages.

The inner lid of the case contains an envelope with two folded documents: Joe Wickenhauser’s statement about the event (part of which I quoted above), and a sheet with photographs of all the participating speakers.

The front page of the actual album has a pop-up of The Kiss.

The location of the original kiss is now occupied by a large dumpster, so the replica photos were all taken at a different (though very similar looking) location. I thought it would be nice if Nan and Hope were kissing against the same background, so I pieced together an image of the wall using sections taken from the background of several of the modern images.

Many of the pages look like pages in any old-fashioned album: pictures glued in and captions hand written in white ink. I did play with moving parts for several more pages. The photographer had shot a rapid series of each couple, and in some cases one could animate them by flipping rapidly through the series. For two of those couples I created slider pages.

On the left is a regular album page with three pictures but the right hand page has a window through which one can see three images in quick succession by pulling the tab. It’s a primitive precursor to a GIF.

and another pop-up on the right.

When you push tab 2 up, Joe jumps.

Inside the back of the box are a copy of the diploma granted to tour participants,

a commemorative button, and two envelopes containing CDs of archival material relating to the event.

Everyone was delighted with the final result — including me. I didn’t really make any money on this commission either, but I did learn some new things about paper engineering (have I mentioned that I hate learning experiences?), and had a lot of fun.

8 Responses to Greystone Secrets: the album